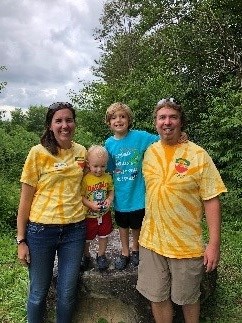 NovusWay Ministries thank Kara and Jacob Ridenhour for their years of faithful service in this ministry. Kara has recently accepted an exciting position with Outward Bound right here in Asheville. With her resignation and due to the co-director model, NovusWay Ministries has lost not just one, but both Ridenhours. Kara and Jacob leave a lasting mark on NovusWay, in particular, at Lutherock where they have been directors for the past five years. Kara and Jacob have themselves been shaped by the ministry and have left their imprint on it.

Kara and Jacob have been counselors and on the senior staff leadership team at Lutherock before they began service as part of the year-round ministry of NovusWay.  Kara used her organizational skills in the registration office while working with church and school groups at Lutheridge and Lutherock, before becoming the assistant program director at Lutheridge.  Jacob long provided leadership for non-summer program groups as well as direction for the Outdoor Adventure Program of Lutheridge and Lutherock.  Together they led five safe, meaningful summers at Lutherock, adding to programming for younger campers while developing that site.  Together they also launched Living Waters Outdoor School providing a strong base for future growth of that program.

It is hard to measure the impact Jacob and Kara have had on thousands of campers and staff while sharing their gifts with NovusWay Ministries.  Having re-located into their own home at Lutheridge last August, with parents, grandparents and close friends to support them, Jacob will be continuing his work with Biltmore Estates while Kara will begin a position with Outward Bound.

Craig Rieger will step in as Interim Lutherock Director and assume executive responsibility for all aspects of the site including budget, hosted ministry, buildings and grounds, program hiring, kitchen and other site staff. Craig will fulfill this role from the home office while still maintaining his responsibilities as VP of Sites and Facilities. Craig and his family previously served at Lutherock for over 10 years.  Craig will participate in the redesign and development of the new leadership model at Lutherock.

Please join NovusWay in surrounding Kara, Jacob and Craig with prayers during this time of transition.